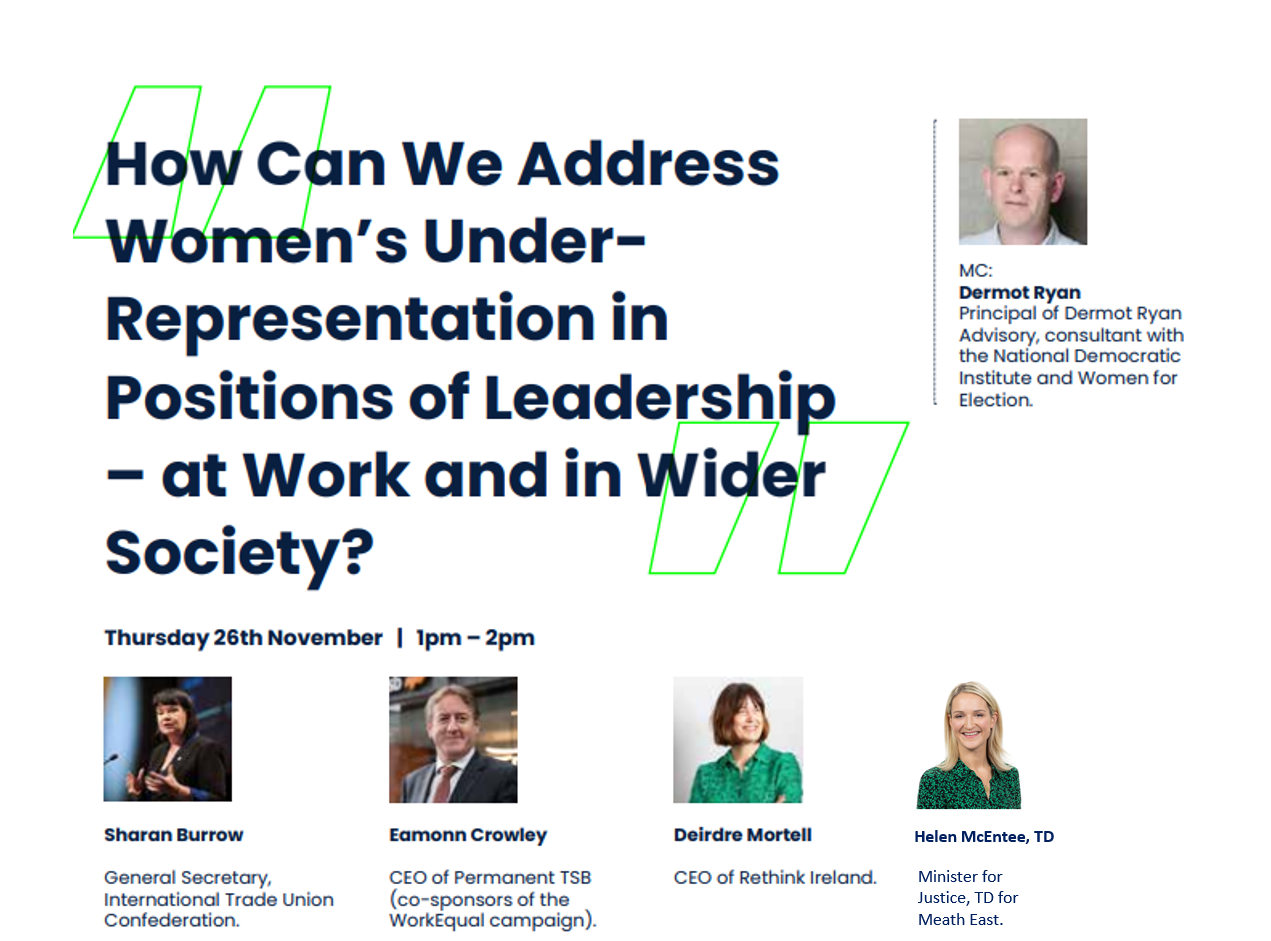 If you happened to miss our discussion about the underrepresentation of women in leadership positions, you can catch up with the full recording below.

The fifth and final event of The Solutions Series drew our biggest audience to date. With hundreds of registrations flowing in in the preceding days, there was a buzz about the digital #WorkEqual office as attendees logged on over lunchtime. This week, we focused on the factors that contribute to women’s underrepresentation in leadership positions, and as our campaign founder Sonya Lennon says, “what we are going to do about it!”

Sonya opened the session by highlighting the recommendations from the 2019 WorkEqual conference report, before handing the mic over to Dermot Ryan, our MC for the session.

First up we heard from Minister for Justice Helen McEntee, via a special video address, focusing on the ways in which Ireland is making progress in this area, and her vision for a more equitable country for all. You can watch the address here.

Next, we heard from Senator Regina Doherty, Leader of Seanad Éireann, who previously served as Minister for Employment Affairs and Social Protections and as Minster of State at the Department of the Taoiseach.

Senator Doherty highlighted how her childhood was steeped in politics – she was even brought to an Ard Fheis wearing her communion dress! But, she pointed out, she saw mainly men involved in politics.

“We need a sledgehammer to be a force for change. There needs to be a real will behind the statements that male politicians make. If we believe in equality of opportunity, then there are steps that we need have to take to make that a reality.”

General Secretary of the International Trade Union Confederation, Sharan Burrow, began by speaking about her great friend and mentor, Mary Robinson, who told her that after her Presidency and that of her successor, May McAleese, little boys in Ireland would ask, “Can’t a man be president in Ireland?”

Sharan revealed that, today, less than 45% of young people globally believe in democracy and highlighted how we cannot achieve the new social contract if we don’t have democracies that are actually working in the interests of people, planet, and prosperity.

Eamonn Crowley, CEO of Permanent TSB, co-sponsors of the WorkEqual campaign, spoke next and stressed how, since his appointment as CEO, he was focusing on promoting diversity and inclusion and introducing more women into positions of leadership at Permanent TSB.

Eamonn cited research carried out by the bank recently which found that one in three people in the Irish workforce were frustrated trying to balance work and home life and that mothers tended to be at the cutting edge of that frustration. The research also found that 20% of both men and women felt their career could be compromised if they took parental leave.

CEO of Rethink Ireland, Deirdre Mortell made excellent points regarding women in politics, revealing that there was only one more woman elected to the Dáil in 2020 than in 2016.

On gender targets at elections, she said that parties need to run AT LEAST 30 per cent women as candidates, not a maximum of 30% (as was the case in previous elections).

The series rapporteur and academic advisor to the WorkEqual campaign, Prof Michelle Millar, brought the lively session to a close by highlighting the intersectionality around gender equality issues that each instalment of The Solutions Series brought to the foreground.

That’s a wrap on The Solutions Series for 2020. What will we do with our Thursday lunch hour now?

You can find all of the discussion on our YouTube channel here.